Phantom project is done - w/ a little something extra 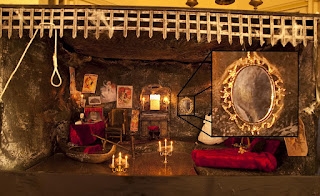 Well, the phantom lair project is done! It was my most ambitious project yet, but I’m happy with the results. I just got the photos taken, and something unexpected showed up - three times. When I reviewed the photos, I saw a skeleton-like face of a man wearing an old-fashion shirt in the mirror. I zoomed in on the photo so you can see it better. Like I said, it showed up in three photos, and I didn’t have a skeleton in the scene that was reflected in the mirror, and I did not photoshop it in. Interestingly enough, the phantom, or Erik as he’s known in the book (by Gaston Leroux who claims that the story is true), is supposed to have shown up in mirrors and had a distorted, skeleton-like face due to a condition he was born with (thus the reason for the mask). He was even known to wear a skeleton mask which gave him the label of having “death’s head.” The image that appeared in the mirror is wearing an old-fashion shirt which does fit the type that Erik would have worn. Just an interesting observation. None-the-less, that image creeped me out!!! Worse yet, I first noticed it late at night. Eeeek!

The project took me about 2 months to create, and cost me around $102 in material cost alone (not to mention any “hourly wage” that would have been added on to this had I sold it). I was able to cut down on costs based on items I already had and new techniques I worked on when it came to lighting and water effects.

I’ve been told that I ought to make these types of roomboxes and have them available for sale. I always do love a new challenge, so if you would like a roombox (whether that be a replica of a room in your own home or of a famous scene from a movie), please send me an email at writtenbyangela@yahoo.com. I’ll be happy to discuss options and pricing with you. Keep in mind, this project took me 2 months, so I’ll need a good chunk of time to finish your project. Who knows, you could soon have a miniature of your favorite scene sitting in your living room!

For more pictures of the Phantom’s Lair project, view the full album here.
Posted by Angela at 8:48 PM 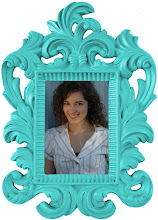